Home Made Ursula Outfit and Hairstyle

We love organising charity events at work, the most recent was Red Nose Day. We thought it would be fun to have a Heroes & Villains theme, I have dark heart so any excuse to dress up as my spirit animal - a villain, and I'm happy. 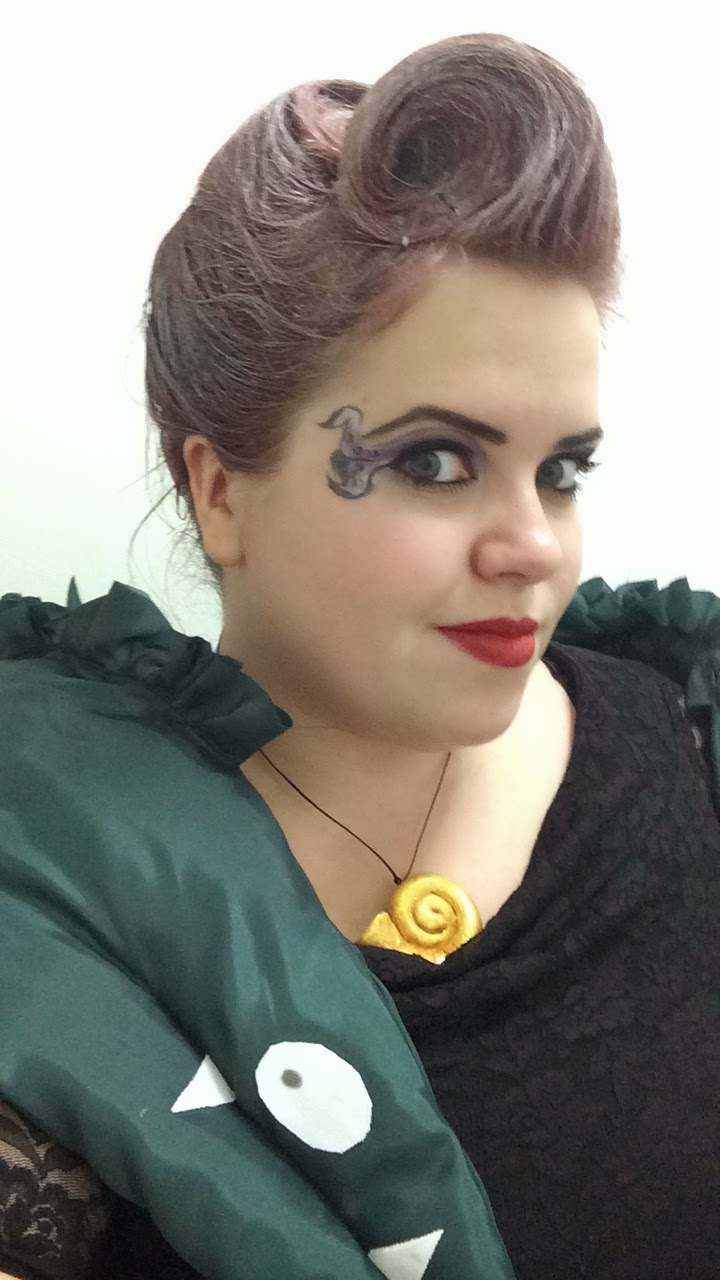 One of my favourite baddies is Ursula the sea witch, she's big, she's bold and she's badass, who wouldn't want to be her? So I of course took to pintest (feel free to follow me by the way 'Rockabillynikki') and I found loads of make up tutorials, some totally unrealistic but one within reach. But first I had to make my accessories. The most important were her eels, I'd seen a few versions online but I decided to go with the eels boa. I bought some fabric online and made a rough pattern, filled the eel with wadding, stitched it up, gathered some fabric on top and added the eyes and teeth. Then all I had to do was sew over the mouths for a bit of detail and it was good to go. I made it in one evening and although it's a bit rough around the edges it worked really well. 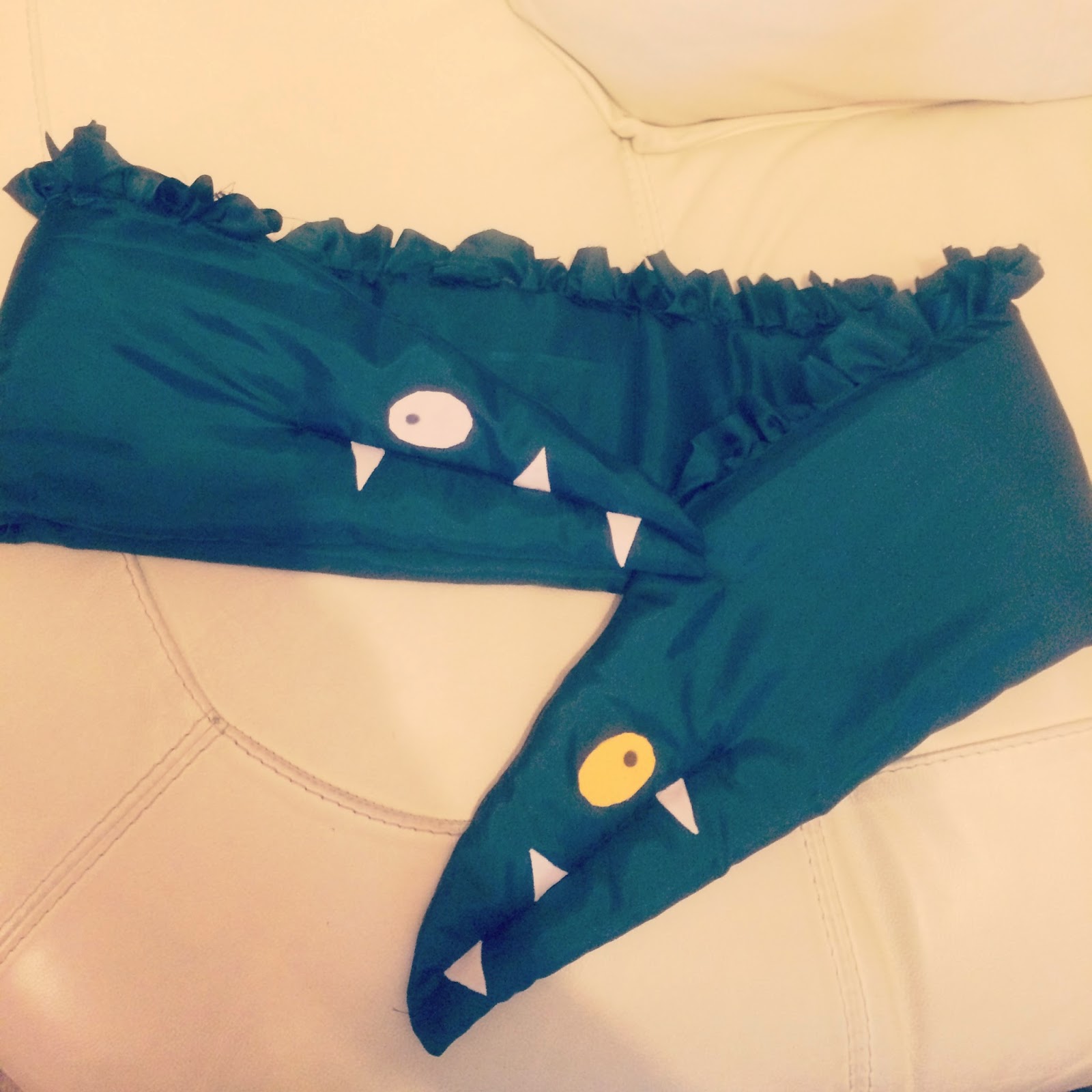 The last thing I had to make was her shell necklace (poor unfortunate souls!). I bought some Fymo clay and rolled it into a trumpety shell shape and indented some line to make it a bit more shell like. Creating a hole for the leather string and baking it until it's hard. I then covered it with gold food paint and sealed it all my nail polish to make it super shiny. Tadah!

I did play with face paint but honestly I looked like Veruca Salt from Charlie and the Chocolate Factory to the point where my mum took one look at me and we laughed to the point of tears for ten minutes straight. 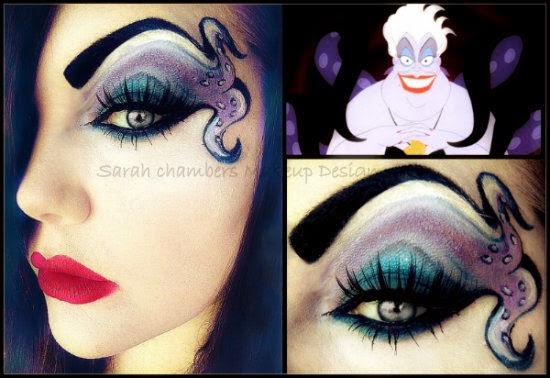 So I ditched that idea, as the thought of walking around walk like a blueberry constantly having to touch it up made me want to die, so it went straight in the bin. And the make up came out! I used this Pintrest image as inspiration. I wasn't able to get mine this bright but I think I did an OK job for doing it myself. For the colour shadow I used Makeup Revolution, the palette isn't available any more but all of theirs are high pigmented and they have loads of bright shades.


I stuck to blues, purples and white and I used a liquid eyeliner for the tentacles and for the power brows. It lasted all day too so I was really pleased with that. I always feel that I can go bigger but I couldn't have been happier really. 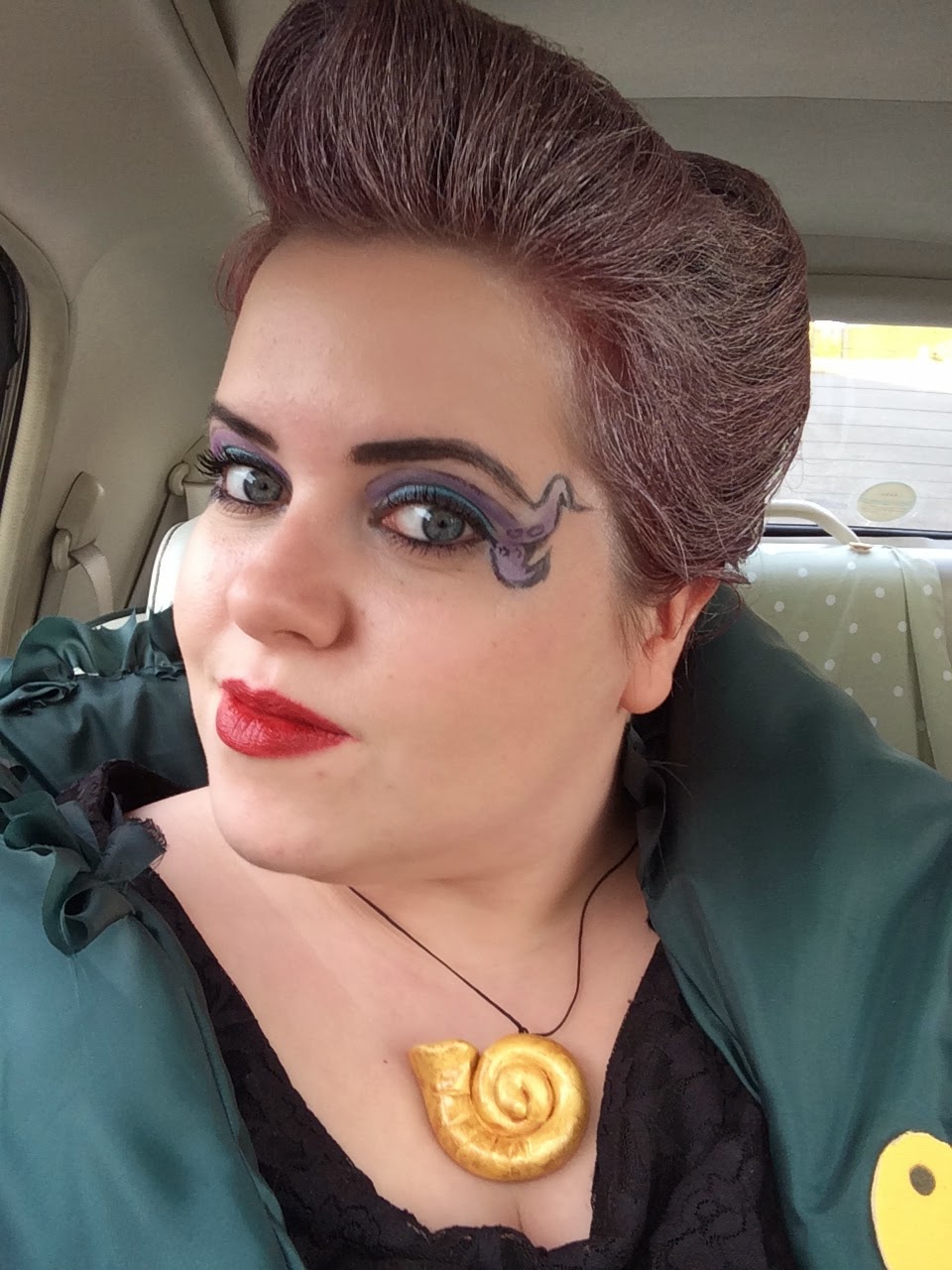 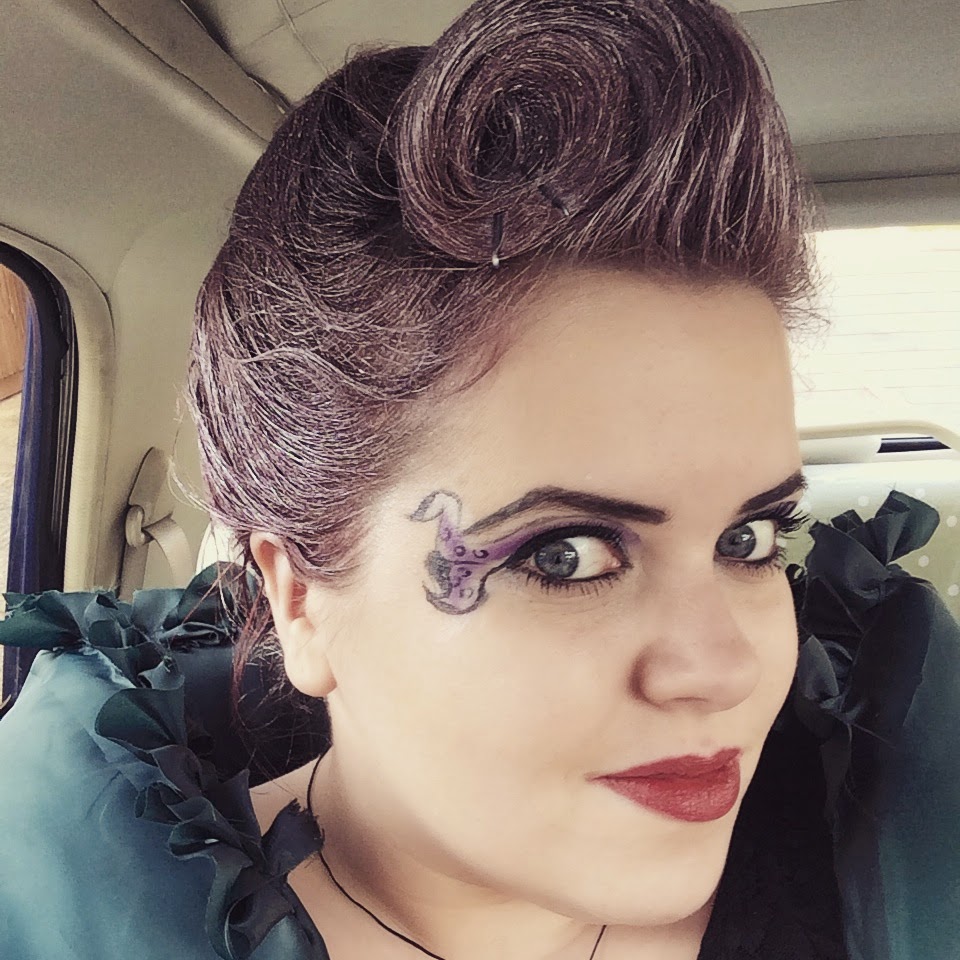 Right. The hair. THE HAIR. I did think about getting a wig but hello?? I love playing with hair so I decided to give it a go. Turns out, two cans of white hair spray is not enough to cover bright red, it does every give you lilac hair. Spoiler alert - I now want lilac hair. I did think I looked a bit like the Fairy Godmother out of Shrek in the end, that might be my next one? I basically just victory rolled it all up, I don't often do the back so it was a challenge but I'm pretty pleased with the final result.


The next thing I had to do was to choose my outfit. I played with the idea of making tentacles but it was a lot of effort for a work event when I was also organising the bake sale I just didn't have enough time. And I wear a lot of black so I had plenty to chose from. In the end I went for a black pencil skirt from Primark and a black lace Bardot top from Very. The boa I ended up having to safety pin to my top so I didn't have to worry about carrying it around with me.  I didn't get a good picture but I also teamed them with some red glitter Irregular Choice shoes. And I'm not gonna like I felt pretty epic. To be pathetically honest I was so sad to have to take it all off when I got home. When can I please be Ursula again next? 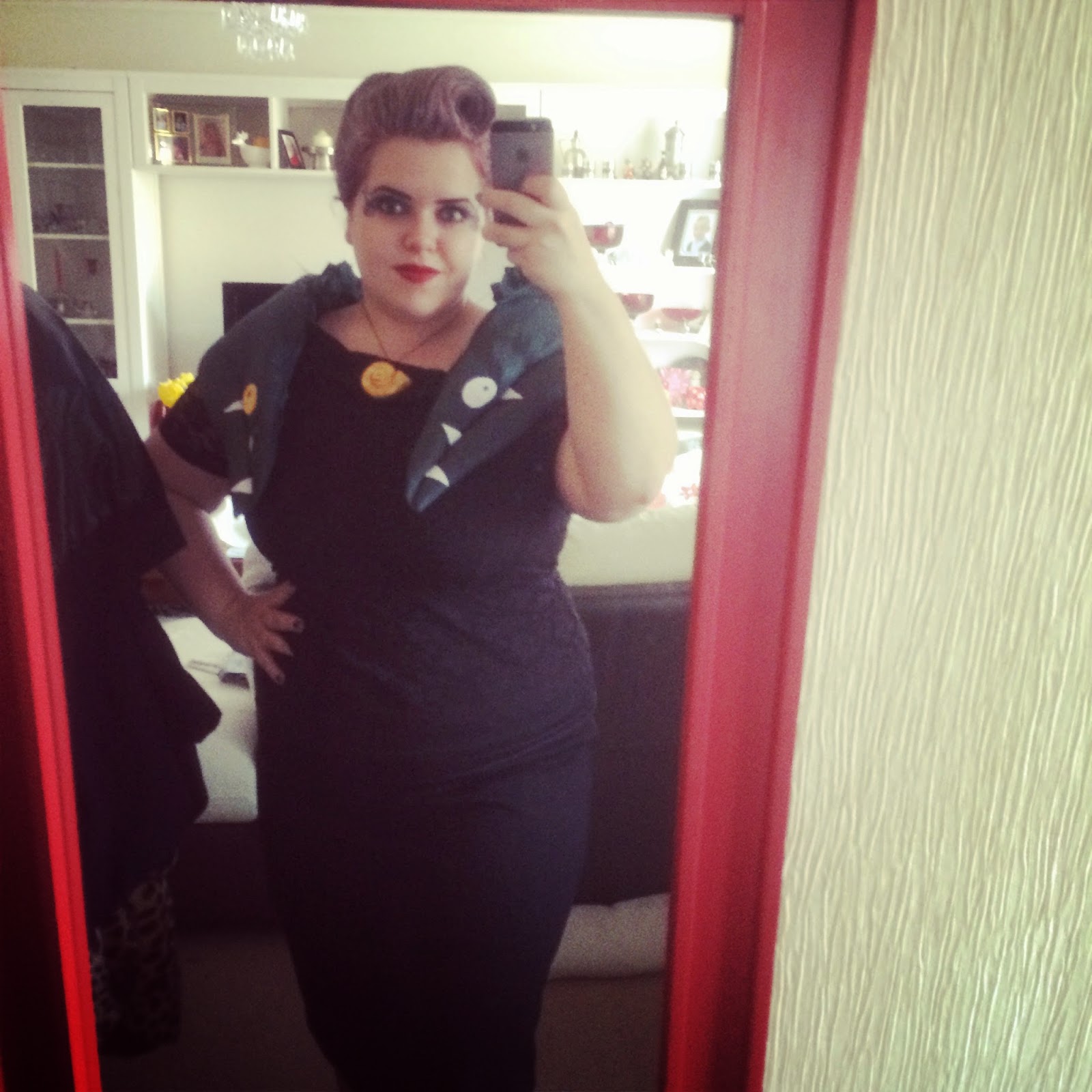 Pin It Now!
Posted by Victory Rolls & Mixing Bowls at 21:59 No comments: 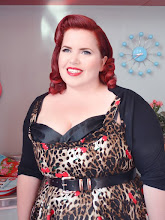 I decided to make a blog that combines my two favourite things; food, homewares and retro plus size fashion. I'm half Norwegian, live in Cambridgeshire with the bearded wonder and am slowly transforming out home into a midcentury inspired colourful palace. Join me in my love of fabulous eats, vintage finds, hairstyles, seasides and plus size fashion. Luckily all of these things spill into the other so I hope you enjoy the new posts. 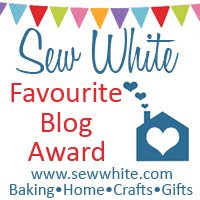 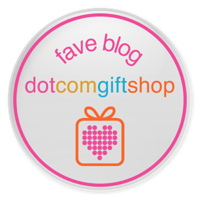 You must add this code to http://thenombakery.blogspot.co.uk/